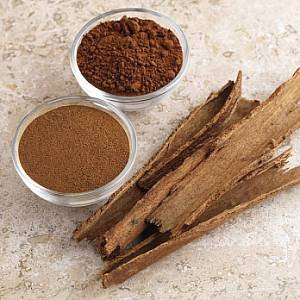 The fall always makes me think of strolling the Farmer’s market, and inhaling the sweet aroma of cinnamon and crispy apple cobbler.   I know apple cobbler may not be the healthiest on the block, but it sure is my favorite! Especially on a chilly fall day, warm apple cobbler with a great big scoop of vanilla ice cream, yum yum! Not only is cinnamon a fragrant natural spice, it also has been linked to protecting the body against numerous diseases, including: type 2 diabetes, high cholesterol, cancer, and arthritis.

Whether in powder, sticks, or oil, here are a few more uses for our spicy friend…

Sprinkle in coffee while brewing for a delightful autumn twinge.

Scatter cinnamon sticks in your dresser drawers to chase moths away from your wool sweaters.

Drop a few drops of cinnamon oil on a light bulb or in a candle to quickly warm up a chilly space and give it an amazing scent.

For old fashioned comfort food with a French twist: on a brisk morning, spread almond oil, honey and cinnamon powder on a freshly toasted baguette.

Or my favorite, instead of spending money on that apple cinnamon candle, why not get some cinnamon sticks boiling on the stove. I promise you’ll get the same effect with a wonderful smelling home.

Get even more great ideas for Cinnamon on this Health.com article “Secret Natural Ingredient: Cinnamon Cures“.

The Healthy Foundation of a Quality Bed!